Need a Christmas Idea for that hard-to-buy-for teenager on your list? How about concert tickets to see their favorite band or singer live in concert near them? My youngest daughter would absolutely love to Jason Aldean, Selena Gomez, Lady Antebellum and Taylor Swift (even though she’s already seen her, she said she woul’d definitely see her again).  My older daughter has stated that she would like to see Usher, Avril Lavigne and Rhianna in concert.

Maybe concert tickets wouldn’t be a bad idea for non-teeny boppers, like myself, as well. Because I would love to see Nickelback in concert again (my best friend and I saw them last year in Omaha). I would also like to see Uncle Kracker (he makes me smile) and the Zac Brown Band (I did see them open for Big and Rich a couple of years ago, and loved them then, but they’ve had a lot of good songs come out since then).

But the number one concert that I and all of my daughters want to see is Adele! In London. In England. I love her songs, even if they are depressing and remind me of my own life! 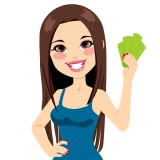 Kim Rowley is the self-proclaimed President of Shoeaholics Anonymous. Follow Kim's Personal Accounts on Google+ and/or Twitter. You can see all of Kim's blogs at KIMarketing.com.