We all have things that we consider to be time-honored traditions. Weddings are no different, but they fit into a broader category of social customs. But have you ever wondered why we do weddings the way we do? Perhaps some of your questions can be answered in the following facts about the roots of modern wedding traditions.

Proper Attire – The Root of the White Wedding

The white wedding dress is canon wedding tradition in our modern world. This new tradition, began as a fashion trend started by Queen Victoria herself, wearing all white to her wedding in 1840, sparking a now centuries-long fashion tradition. It was a trend that quickly caught on in the wealthier classes, to align themselves with royalty and as a symbol of wealth. It has now permeated every social rung to what now is the iconic white wedding dress.

Another tradition that we have is in the convenient form of a rhyme.

“Something old, Something new, Something borrowed, Something blue” There is one more line that isn’t as well known which is ” And a sixpence in her shoe.”

This rhyme isn’t particularly cryptic, but full of meaning. This tradition is passed down from the Victorian Era, where they believed that following the guidance of the rhyme would bring good luck to the bride and prosperity to the marriage. The “things” the rhyme mentions are meant to tie the bride to her family and community as she enters married life. They also allow her to embrace the new chapter in her life and commune with those already in holy matrimony. The color blue, symbolizes love and faithfulness, for a healthy relationship. The sixpence is supposed to be a token of the wealth the couple hopes to enjoy, traditionally worn in the shoe.

Why the Bridesmaids and Groomsmen? Bridesmaids and Groomsmen retain their role as witnesses for weddings. But the original tradition goes back to the superstitious times of the Roman empire. Back then they were a form of protection, against both literal thieves and supernatural ones. They were expected to wear the same attire as the couple, to confuse any mischievous spirits and prevent them from directly targeting the bride or groom. Now today, they still play a supporting role, but typically it is in the form of community rather than skulduggery.

The Truth of the Diamond Ring

The history of diamonds in the western wedding tradition has a similar story to the reason wedding dresses are white. However, America’s “royalty” instead appear in the form of the Hollywood elite of the 50s and 60s. The diamonds worn by famous well do actresses like Marilyn Monroe and Audrey Hepburn captured the imagination of America. Iconic media, like the song “Diamonds, Are A Girl’s Best Friend,” as well as movies like “How to Marry a Millionaire” created a trickle-down effect. Audiences, enchanted by the romance of the silver screen and the glamour of Hollywood royalty, diamonds became the symbol of romantic love and being well to do. Even though that was 50 years ago, this perception of diamonds has remained mostly unchanged and is considered a critical part of the wedding tradition as a whole.

The Wedding Procession, Who Wrote It?

This familiar song is known even to those who haven’t ever attended a wedding in person. However, the identity of the composer is obscure to most of us. Richard Wagner is his name. The German composer wrote what he titled “The Bridal Chorus” for the 1850 opera “Lohengrin,” It has been adopted in the Western world, specifically, as the iconic bridal procession.

The Origins of the Honeymoon

Today we see the honeymoon as the getaway trip for two newly married people to enjoy a vacation and celebrate their new life and new love. However, the tradition is rooted in a time where it was common practice for young women kidnapped and forced into “marriage.” Then to be kept in hiding until the family gave up the search.

Today’s ritual is something similar. Afterall the groom takes the bride away from her family. But the “kidnapping,” now looks like a well-planned vacation. Plus, the family knows where the bride has gone.

This tradition is another odd one, but the fact is that luck has everything to do with it. Brides, being seen as good luck by the Victorians, meant that being able to come into contact with one was supposed to give one romantic success. This superstition, unfortunately, led to the mobbings of brides. The bouquets tossed into crowds were meant to be deterrents. For even a flower graced by a bride’s hand was believed to improve one’s marriage prospects. Now, we throw the entire bouquet, minus the mobbing, for much the same reasons, whoever catches it is supposed to have the good fortune of marrying soon. 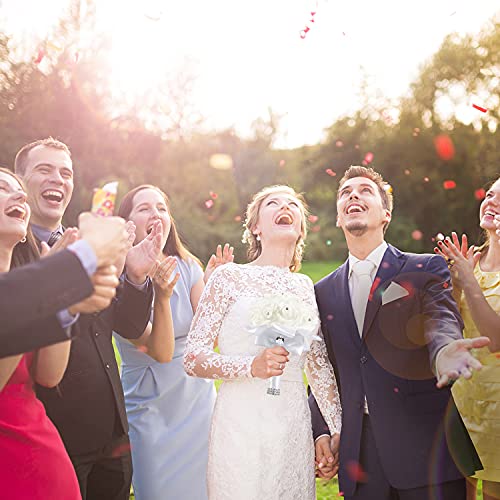 In conclusion, the histories behind our traditions, through a personal or social lens are always quite revealing about ourselves and our culture. Whether we are being sold that diamonds are synonymous with love or that a bride’s touch is somehow good luck, we are all parts of the past and the present, who knows what the next generations will take with them into the future.